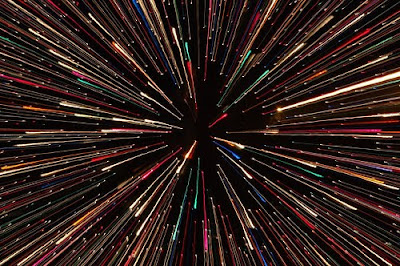 The spaceship has determined the exact location of the mysterious beacon...and is in love. Today's song analysis deals with Daze of Yor, a kind of Ravel's Bolero meets prog rock (or at least that's how I see the finished product, stylistically). The version below is the very first live version of this incarnation, performed at the Photosynthesis festival in southwest Washington state on August 8th, 2009. I say "this incarnation" because there was another version of the song that I had previously played live, but I decided I liked this version better. The old version is decent, so maybe one day I'll post it.

If my objective of getting this album released on vinyl works out, this track would kick off side-B of Part I - Blood. Our spaceman has been rudely awoken from a deep slumber by the spaceship's warning program concerning high-velocity travel. As it turns out, the spaceship has located the source of the beacon, which is why we're here in the first place, and is in "hot" pursuit of it's location. I'm not sure if I just want to approach Daze of Yor as another observational piece about travelling fast through space, or give it some more story. As I mentioned in my first Terramecha blog, I want to convey somehow that the spaceship itself is being seduced or falling in love with the beacon signals. Using this plot device, I could possibly show that this situation is out of the spaceman's hands, as the spaceship has decided to ignore the spaceman for "her" own selfish gain. Perhaps during Daze of Yor, the spaceman is disoriented due to just waking up while his ship is about to go light speed (or whatever-fast speed). The spaceman's realization that he has lost control of his ship will come a song or two after this.

So why was the spaceman sleeping? That's a terrific question, but I will go over that at another time. Trust me, he was tired, mentally and physically.

The piece itself as it stands is another "builder." I seem to like to make tracks that start off sparse and ambient, gradually build a bunch of layers, make it get really noisy, then make it peter out. I'm not a big fan of the rock cliche verse-chorus-verse-chorus-bridge-chorus approach, and a lot of my work is collage based. I like the idea that none of the parts are particularly important on their own, but when mixed together with other unimportant parts, they combine to make the song itself interesting. I also like the idea that you can listen to a song however many times and still hear something new and different with each listen.

Earlier, I compared the track to Ravel's Bolero, mainly because it has sort of similar lead line, but really, the comparison stops there. One thing I would like to achieve with the final piece is to implement some transposition of the main key to make things a little more interesting/less static. I will most likely add some more harmonic elements too, to give that section a more orchestrated feel. I think the transition from a heavily orchestrated section into some heavily layered noise, or at least a heavy arrangement of more synthesized textures, would have an intense effect, and hopefully convey the intensity and speed of the spaceship blazing through space.

A lot of the synth-ier samples I used for this piece, as well as some of the beats, were either found online or collected over the years from sample libraries. Basically what I'm getting at is that they are short loops without a lot of character, so they either need to be processed further or rewritten. For example, those fast moving arps that appear halfway through the song were short loops that I found. I like their movement within the piece, but feel they could be more organic, and not necessarily repeating every few bars. The main melody was created using my trusty M-Tron Pro Mellotron emulator. Alright, that's all I got for now.

ok, so i have downloaded all the tracks and i figure it is roughly 12 tracks that go something like this:

the only thing i see missing is a description of the crystal cities which i would put at the start of rust or ideally would be another side dedicated to describing the city/robots!!! 3 disc set... yeeha!!

image for you, not quite right because there are trees and snow, but i love this guys work, as i'm sure you do too...

Definitely an album I'll get.

Fuck, I typed up this long message and Blogger gave me an error!

I will have a tracklist posted soon!

Thanks for the artist reference! I'm not all that familiar with sci-fi art, but that is right up my alley!