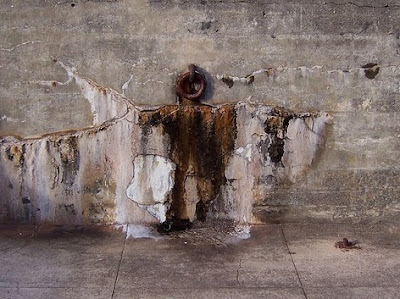 I'm going to begin today's song analysis with the end. That's right, the last song on Terramecha, which is tentatively called Aftamath. Who knows, I might keep the name, I don't know. It is actually the oldest song in the bunch, and I recently rediscovered it about a week ago, after looking through old files for potential use. Aftamath was most likely conceived during or after the Unifactor sessions in 2005. Around that time a former employer asked me to make some music for a video he and his company made promoting a Volkwagen auto show, full to the brim with souped-up VW's and large-breasted car models. I believe I submitted 3 tracks, all called V-Dub. Anyway, Aftamath spawned out of one of those tracks. Prior to this resurrection, in 2007 I had attempted to rewrite the V-Dub track and recorded 4 different takes in hopes of finding a good arrangement. I wasn't pleased with the results, so I ceased work on the project. Another reason I suspect this was initially made around the same time as Unifactor is that it has one of the same bass drum loops as the track Unifactor, the final piece/title track. When I first realized this, I was all like "damb, I can't use this track!," but then I thought it might work under the grounds of "conceptual continuity." More on this later...

At this point in the story the robots inside Terramecha have rusted out and perished due to a deadly spore that grew out of a mysterious red liquid found on the spaceship. Aftamath is an observation of the devastation, as all signs of "life" appear to be coming to an end...or are they? Cinematically, I see this piece, at least the beginning, as accompanying music to credits, with a slide slow of rusted out robot carcasses and smoldering mechanical wreckage. The opening chord changes are simple; almost too simple, but they have a nice sort of minor key feeling to them. I am definitely going to aim to make that progression more interesting. The timbre of the chords at the moment are a bit cheesy as well, as is a lot of the harmonic material, so that will definitely change in future versions, but I think the general feel is there. This is easily one of the lesser developed songs slated to be on the album. The beats are probably the strongest part of the song, but they need work too. This goes back to my first article on Terramecha, where I need to work on more structured, "fancy" edits.

At the end of the piece, all "life" on Terramecha is presumed dead, or is it? The deadly spores have taken over the giant rust ball, and if we zoom in closely, we observe that organic life is beginning to grow out of the spores. I would like to convey this using audio, but I'm not sure how I'm going to approach it yet. Dripping water might be effective, if done the right way. Which brings me back to conceptual continuity. Conceptual continuity is a concept that was made popular by Frank Zappa, where he introduced subject matter or themes from previous works into later works. Poodles and zircon encrusted tweezers are two examples of things that showed up in several of Zappa's works. Here, read this quote:

"Well, the conceptual continuity is this: everything, even this interview, is part of what I do for, let's call it, my entertainment work. And there's a big difference between sitting here and talking about this kind of stuff, and writing a song like 'Titties and Beer'. But as far as I'm concerned, it's all part of the same continuity. It's all one piece. It all relates in some weird way back to the focal point of what's going on."

Now, getting back to Aftamath and the reused Unifactor bass drum loop. Unifactor (the album) sort of represents the organic home-world of Gel-Sol (I also stole the name/idea from artist Jim Woodring as an homage). By referencing Unifactor in Aftamath, I am suggesting that this home-world, or a new, but similar organic world is being born inside Terramecha. And the cycle of life, whether man or machine, continues. Who knows, maybe sometime in the distant future machines will once again rule Terramecha? I can't see that far into the future...

Feedback greatly appreciated, especially with these lesser-developed pieces. Thanks for reading/listening!