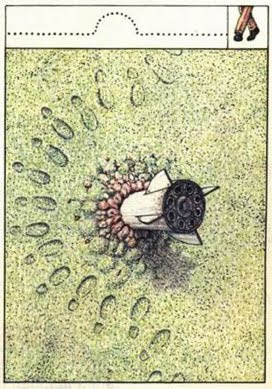 Things are not going well on this spaceship. Our spaceman has lost control of the ship, literally and figuratively...

Today's song analysis deals with Omega Ray, the final piece of Part I, Blood. The spaceship has fallen deeply in love with some sort of beacon from the depths of space, and has made it "her" mission to find the source. The spaceship has overridden any manual control, leaving the spaceman powerless, and now just along for the ride. Too bad this ride is going to be bumpy and death-inducing! Below is a sketch I worked on this weekend for Omega Ray. I say sketch, because all I really did was throw some things together that I had been collecting for this piece. The flow of the piece is there, but I really want to make this one intense.

Ok, back to the story. The spaceship has reached Terramecha, a dark and rocky planet that appears to have no life, at least on the surface. I imagine that the spaceman would be very disappointed about this, thinking "I came out here all the way for this?" It gets worse, buddy! I haven't quite worked out the details of how the ship perishes, but I do have several ideas of how it could go down. In Stanislaw Lem's The White Death, The planet Aragena is protected by a "machine-made" asteroid field, making it perilous for anyone and anything in it's vicinity. The story also mentions that the rocky terrain is magnetic, which is also kind of a cool idea. Perhaps a magnetic Terramecha is pulling the ship towards it's surface, forcing it to take a beating in the asteroid field first. The track is called Omega Ray, and this is because I initially thought Terramecha (the planet) might shoot the spaceship out of the sky, though this might draw too much attention to Terramecha, a planet that really wants to be left alone. Either way, the spaceship crashes violently into Terramecha's surface, killing the spaceman. If I decide to not use the title Omega Ray, I might call it Flailing Ultrasonic Collisions Kindle Your Overall Understanding, which is a title I have always wanted to use for a piece, but really only used for some under-developed music I made in my youth. If you're gonna have a title like that, the music better be pretty awesome!

Musically, I want to make the piece sound like you (the listener) are in a spaceship that is simultaneously being torn to shreds and heading very fast into a large metal planet. There are some melodic bits that move through the mix, and to me they sort of convey the spaceman's attitude, which is more or less "Fuck it, I'm fucking dead!" The track is mainly a collage of noise. Asteroids are severely denting the spaceships hull, all internal machinery is failing, not to mention alarms sounding, pipes breaking, and your mom calling you on yer intergalactic space cell phone. Not a good time, mom!

A lot of this material was created with Reaktor. I don't remember the particular ensemble I used for all that harsh noise at the end of the piece, but it was pretty cool because it would only make harsh noises. Using Reaktor's random function, I mainly recorded myself hitting the random button every couple of seconds and doing this for 5 to 10 minutes at a time. Take that, virtuosity! Anyways, I never really dealt much with sooper-noizy textures like that, so I thought it would be cool to try to introduce something more harsh in my music, and thematically, it works out pretty well for this piece!

Some of the elements in Omega Ray aren't even my creations. I host a monthly in Seattle called Monster Planet, where we get 5 musicians to improvise to shitty B-movies all night. It's an incredible thing to be a part of; it's really laid back, and the musicians want to play there. I play at Monster Planet too, but one of my goals is to build a culture/network of musicians who want to improvise, and hopefully make some music that's never been made before! I also multi-track the Monster Planet performances, so I have a shit-ton of audio sitting around on my hard drives waiting to be put out into the world. One of my other goals is to share all the multi-tracks with the other musicians, in hopes that someone might make an album out of the material, and encourage others to do the same thing. So far, none of the other musicians are terribly interested in the multi-track material. They most likely have other projects going on, or are plain not interested. To me, this stuff is gold, so I'm going to use it! I used some Monster Planet material on K8EMA, and gave a few shoutouts on the cd sleeve. So back to Omega Ray, I used some other people's playing. I'll be sure to give shoutouts when these pieces are more set in stone, much like an embedded spaceship on the surface of a cold, dark planet.

Though this particular story is coming to an end, things are about to change on the planet Terramecha, which was really only introduced in Omega Ray. I'm at about the half-way point with introducing these songs, so my next article most likely will be a summary of the progress so far, and some other general ideas as to what I'm thinking about in regards to this project.

Thanks for listening as always! I appreciate all the feedback so far, on this blog and on my facebook/soundcloud pages. Keep it up!

Oh, and if you'd like to be a fan of Gel-Sol on Facebook, please visit this link!