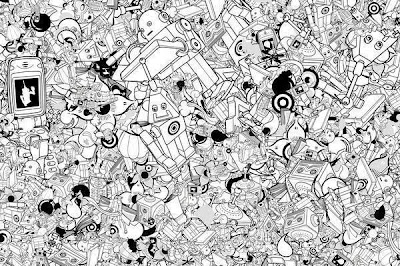 Today's song analysis deals with another old track in the Terramecha story, a track that used to be called Caldera, but is now called Mecha Ritual. To make matters even more confusing, there's another track of mine that was called Mecha Ritual, but it doesn't have a new name yet and has been reappropriated into a different part of the story.

Below is the first-ever performance of Cal...uh, Mecha Ritual, played at the Collins Pub in Seattle on April 22, 2006. For me at least, it's quite hilarious imagining music like this being played in what's really a glorified sports bar. There is nothing remotely psychedelic about that, and there I am, cluelessly twiddling away with my cosmic space music. From now on, I should only accept gigs if they are in outer space...

Mecha Ritual's exact placement on the album is unknown yet, but it will either be right after Retrieval, or the third song on Part II, Rust. There's another song that's fighting for that position, but I'll get to that at another time. At this point in time in the story, the robots have brought the wreckage of the spaceship down into a huge open area, where robots of all shapes and sizes join in and surround the ship. Then, some sort of ritual begins (bet you didn't see that coming). The main objective of this ritual is to ward off any bad mojo the ship might bring. Robots of similar appearance emit strange calls that are unique to their build. The live version below is long and drawn out, and is nowhere near complete. It's my goal to create a middle section with a "call and response" section as if the different classes of robots are singing/communicating/bleeping at each other. I plan on doing some research on ritualistic music, and even some voodoo music, in hopes of creating a more futuristic version of a tribal ceremony. One thing that is unique to the posted live version is the end, where a collage of mechanical space cries and effects play over a humming bass drone. I listened to many live versions of Mecha Ritual over the course of last week, and none of them had this part. I guess I thought it was too far out or inappropriate for live performance at the time. Now I like it! I'm gonna have to dig through my archives to find it though, and that might take awhile.

Mecha Ritual is also one of the earliest pieces created for Terramecha. I almost see it as a sister piece to Aurora, in that it's sort of a slow-moving, observational piece. Visually/cinematically, I see slow pans circling around the ritual, showing the variety of robots, and the movements they make as they emit their sounds. Think the Balinese monkey chant in Baraka mixed with Pink Floyd at Pompeii mixed with some Stanley Kubrick-esque slow-pans and zooms. Also much like Aurora, Mecha Ritual's inital tracks were created with Reaktor, again the Metaphysical Function ensemble. A bulk of the drums/percussion were made with Reaktor's Limelite ensemble, an amazing drum machine/sequencer where you can load your own source sounds. With the preset sounds it gets a bit too techno for my liking, but you can get some really organic results when feeding it your own sounds.

And that's another goal of mine. I want to create organic robots. Each robot inside Terramecha is unique; they might have come into this world with similar makes and models, but they still have characteristics that differentiate themselves from everyone else, and have the capacity to think. There are so many people on this planet that are essentially robots, so why can't it be the other way around? Plus, you could sell organic robots for more money at the grocery store!

Ok, that's all I got for today. Give me feedback. And if you have any tips on some good ritualistic/voodoo music, please send them my way!

Killer! Thanks for the link! Much appreciated!