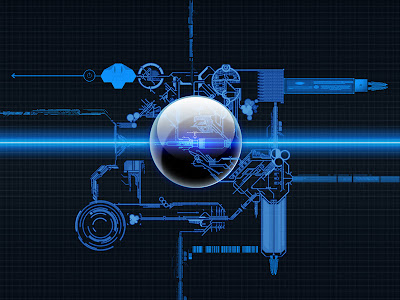 Hey, I'm back! Apologies for the delay in posts, but I was finishing up some "work" work, and needed to get that out of the way. As I mentioned a few times before, song titles and their positioning on the album are subject to change at any time. This is one of those times. In my last Terramecha-related post I presented the potential song ordering of the album, with some hints as to what the song would represent in relation to the story. In today's song analysis, I will be examining Paths To Frenzy, another one of my older tunes that showed up on many a live recording over the last 5 years. At the time of writing the last Terramecha post, I thought this track might be best suited for depicting a war between the various robots of Terramecha, but now I feel it has a better use describing an event earlier in the album, where our spaceman logs into a futuristic internet, and information is transmitted into his brain instantaneously, allowing him to stay up-to-date with news and "entertainment" throughout the galaxy.

Paths To Frenzy will now cap off side A of Blood, as the spaceman needs a little wind-down time after a potentially dangerous situation was avoided during Aurora. Below is an early live recording of Paths To Frenzy, recorded in the early morning of August 20th, 2006 at a house party in celebration of the annual Hempfest gathering in downtown Seattle. I believe I had played earlier that night a residency I held with my good friend Kevin Hoole, so I was dressed somewhat nice. I had also recently got a haircut in an attempt to gain employment. Not just a trim, but really short hair. So upon arriving at this hippy house party, I realized that I must look like I'm lost or a Narc. Also, since this was an after party for Hempfest, EVERYONE was already way fucked up, which probably made my appearance even more awkward. After finding my contact, I go up three flights of stairs to a tiny-ass room, with minimal playing area on the floor, and one passed out guy on a couch. He was my only audience member for the entire duration of my set. Classic Gel-Sol live set.

Back to the story. In Aurora, our spaceman in his trusty spaceship nearly avoid mechanical failure by high-tailing it out of Aurora's cosmic grip. Needing a break, and some time to catch up on communications, the spaceman enters a room with what seems to be a futuristic dentist's chair, with all sorts of arms and attachments that are necessary to "log in." The inspiration for this contraption comes mainly from two sources. In The Matrix, the hero Neo is jacked into The Matrix by connecting some sort of cable into the back of his neck, where programs can be uploaded almost instantaneously, allowing him to acquire new skills with relative ease. Regarding my machine (I haven't come up with a name for it yet), I imagine the logging in process as non-invasive, perhaps something as easy as putting on some sort of fancy helmet. My second source of inspiration for this device is the Orgasmatron, from Woody Allen's 1973 movie Sleeper. The idea behind the Orgasmatron is that you step into the futuristic telephone booth, and using some form electromagnetics/magic, you are rewarded with a massive orgasm without the aid of physical stimulation. I could also see some value in this device if you wanted to make your hair stand on end for a fancy party. Think of my machine as a futuristic internet; you can check your email, news, and even view porn!

So in regards to the storyline, the spaceman logs in to the machine, checks his email, and watches video communications of his family. I don't know how big his family is, but for right now let's say he has a wife and a young daughter. After the initial piece builds, which sort of signifies that the spaceman has logged in, a break occurs where samples are introduced to convey the information the spaceman is receiving. Perhaps his daughter saying hi, and his wife is telling him she loves him and wishes he would return home soon. I want to show that the spaceman has a life outside his profession, and is alone and very far away from that life. After family stuff is out of the way, the spaceman then checks out the news of the galaxy. Much like news on Earth, it's mostly bad news. War atrocities, natural disasters and general violence. Being the sample hoarder that I am, I have tons of fake newscasts that would work great in this piece. I might even sample some real-life news to enhance this experience. Now the spaceman is thoroughly depressed, so like any sex-starved vagabond, he begins watching (or more appropriately, absorbing) pornography. Again, I collect a shit-ton of samples, and I have some rather rude stuff that would fit nicely over the top of the music. This is also a great piece to integrate some of my plunderphonic work, and hopefully add to the experience of sitting in my "Orgasmatron."

To add a little plot to this cosmic jerk-fest, the "female" computer that runs the ship hacks into the spaceman's transmissions and determines that this is what love is, and these feelings are similar to what she's experiencing with the mysterious beacon that is calling her from the depths of space. Immediately after this deduction, the beacon once again sends out it's signals, and the computer, now with a new sense of urgency, shuts down the Orgasmatron, pulling the spaceman back into reality and cutting short his pleasure before he can "blow his load." Do I really want to depict a guy blowing his load anyways? I think it's better to leave that part up to the listener's imagination. Plus, that's just gross!

In the example below, Paths of Frenzy has a classic Gel-Sol structure; song builds up to main idea, takes a break, then builds back up to a stronger, more layered version of the first part. There will obviously be some sort of break in the final version to showcase vocal samples, but where it goes from there, I'm not sure yet. The beacon/alarm sound in the version below enters during the break, but I think I will reserve this for the end of the album version to signify that the beacon has been more precisely located, and that the Orgasmatron is about to shut down. Since this was one of the earlier tracks created when I began the Terramecha project, I was using some of the same software as pieces like Aurora and Mecha Ritual. I definitely used Reaktor ensembles like Metaphysical Function for atmospherics and Limelite for percussion elements. A bulk of the synth lines were also created with Reaktor, but I dont remember the ensemble names. Perhaps in future posts I can clarify this.

Stay tuned for more Terramecha! And give me some feedback, damnit! Even if you don't like it, I'd like to know what you think!