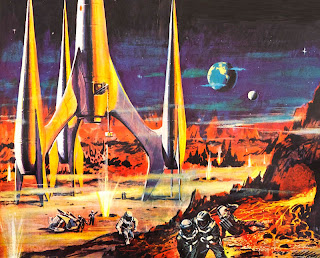 Where better to start with Terramecha than the beginning? At the end of this article I have provided a link to a rough draft/sketch of the opening piece of Terramecha, simply named Forward.

I chose the name Forward for several reasons. One, it sort of conveys that I (Gel-Sol) is moving on, hopefully into new, exciting musical territory. Two, it marks a new adventure for our spaceman. His spaceship has just notified him that she's detected a communications beacon somewhere in the depths of space. I'm not sure what this guy does exactly yet, but he works for some sort of corporation and is hired to scout out unexplored worlds in search of resources. I know that's extremely vague, and there's no physical way a human could cover such territory in a lifetime, but hey, it's science fiction! Suspend yer disbelief! The third reason I chose the name is that it is a synonym of "foreword," and this piece represents a sort of an explanation of what is about to happen. Obviously the music will not be blatantly telling the listener the information, but I do want the song to convey that an adventure of epic proportions is about to begin.

The draft I posted below is comprised of samples I have found, online and from other sources, and original music. The lead melody was created using the GForce M-tron Pro Mellotron emulator. Being a huge progressive rock fanatic, I have always been a sucker for the Mellotron. It's kinda creepy, and has a very organic almost out of tune sound. Apparently real Mellotrons are a real bitch to keep in tune, but the M-tron Pro allows easy tuning, and has a ton of great sounds. You will probably see me mention the M-tron a lot in my posts, as I use it quite a bit for scape generation and other melodic purposes. The lead melody itself in Forward is somewhat reminiscent of Also Sprach Zarathustra by Richard Strauss, the infamous intro music to Stanley Kubrick's 2001: A Space Odyssey. The beauty of Also Sprach Zarathustra is that with each cycle of the melody, the mood of the piece gets more intense. My goal with Forward is to achieve the same effect, with the song seemingly disintegrating into the next piece after an epic climax. At the moment, the piece is a little stiff. Things that might help counter this would be to make the lead melody a little more organic, and to not place the drum hits so dead on the one-beat. Clever placement of the various tracks in different parts of the spacial plane would help to create more depth too.

The very beginning of Forward starts with a distant drum, appearing to get closer before the rest of the music abruptly comes in. Part of that was inspiration from the beginning of Blade Runner, and the accompanying score from Vangelis, however I don't really want to rip off that idea so literally. The scene I envision in my head during this first section is our spaceman hero walking down a hallway, about to enter the interstellar launchpad where his ship is about take off. The repeating and crescendo-ing bass drum represents slow-motion footsteps, muffled as if the spaceman has already donned his space helmet or some sort of headgear. I would like to integrate some slow heavy breathing also, to infer some tension before takeoff, for the spaceman and the listener.

By the end of the piece, the spaceman is now in his spaceship, ready to take off. The sounds of computer noises and machinery fade in to set up the next piece. I have had several ideas for what this piece of music might be, but I still haven't found the perfect fit. To me, the second song on an album is extremely important, as it sort of gives you a sampling as to what the rest of the album could be like. But that's for another time...

Thanks for reading/listening! Would love to hear your feedback!
Terramecha: Forward - draft 041411 by Gel-Sol

Very awesome Andy! I'm excited to see you getting to work on this album!

Also a good book to maybe take inspiration from could be Arther C Clarke's Rendezvous With Rama.

Keep up the good work holmes!

I've read a ton of Arthur C. Clarke, but never Rendezvous with Rama. I'll definitely check it out! Thanks man!